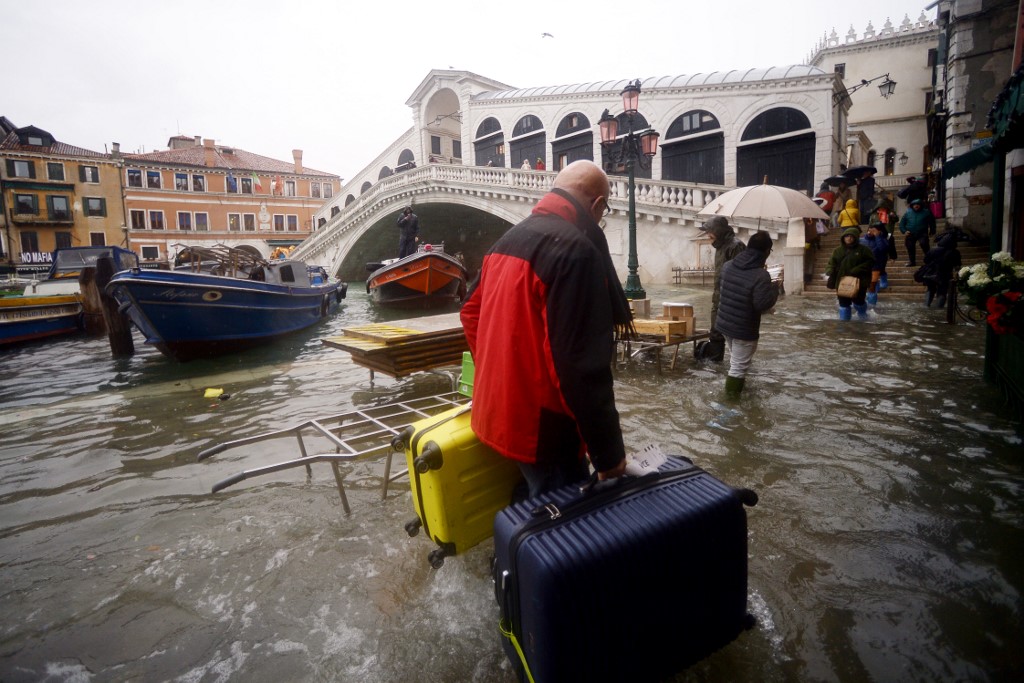 Venice is experiencing epic flooding. Hitting a high-water mark of 74 inches, flooding has deluged 85% of this beautifully unique archetypal city. It is the worst flooding on record for the city since recordkeeping began in 1872. The reasons why are various, but climate change is recognized and undisputed as predominant among them.

Venice is one of the most beloved and recognizable areas of real estate in the world. A bustling city founded over 1,500 years ago, it is actually a unification of 118 small islands linked by over 400 bridges arching over postcard-photo famed canals.

Home to some of the most beloved tourists’ landmarks in the world – Piazza San Marco (St. Mark’s Square), St. Mark’s Basilica, the Bridge of Sighs, the Grand Canal, the Rialto Bridge, the Doge’s Palace, the Ca’ d’Oro, the Gallerie dell’Accademia – it is resplendently breathtaking. Venice is one of the treasured old-world cities where the vibrancy of art, architecture and history are all nestled under one map pin.

Climate change cares not for history

The effects of climate change on Venice are significant and they carry long-term ramifications. The rising seas obviously – and devastatingly – impact the city, but there are also a host of other climate related phenomena which are further crippling the city’s ability to effectively respond.

Strong storms and continuous rains set the stage and are coupled with the intensifying winds coming off the sea and lagoon causing water to, literally, blow directly into the city.

And, over the last many decades, in a need to supply the city with industrial and fresh drinking water, the city extracted an abundance of groundwater via drilling and pumping. This, in turn, led to land subsidence; a phenomenon where the land drops as resources are removed from it. So effectively, while the ocean and lagoon that saddle up next to the famous city have been rising, Venice itself has actually been sinking. In a city suffering under the weight of this crisis, tourists are still snapping selfies in St. Mark’s Square, though currently standing thigh-high in opaque water washing in from the murky lagoon. This is the same lagoon which suffers from being the dumping site for an ample share of Venice’s sewage and septic systems.

Yet this is a city that cannot completely shut down to deal with this crisis. The tourists must be welcomed even in extreme situations like this one. Tourism is absolutely necessary to modern Venice and Italy as a whole. The city receives 36 million visitors a year, injecting vast sums annually into Italy’s national economy.

Throughout this misery historic buildings are being maimed and undermined by the sheer volume of water permeating the mosaic floors, stone walls and Renaissance architecture. Water has inundated St. Mark’s Basilica, a 1,000-year-old landmark, enveloping the crypts, leaving damage which is as yet incalculable until the water recedes. Currently damage is roughly estimated to be in excess of one billion dollars.

As if on cue

Yet out of this desperate situation there arose a moment, so perverse in its irony it seems lifted from a script in a Hollywood blockbuster.

But when the vote was taken, the climate change plan was voted down and all measures for mitigation and action were rejected.

The paradox would be laughable if it were not so ruinous.