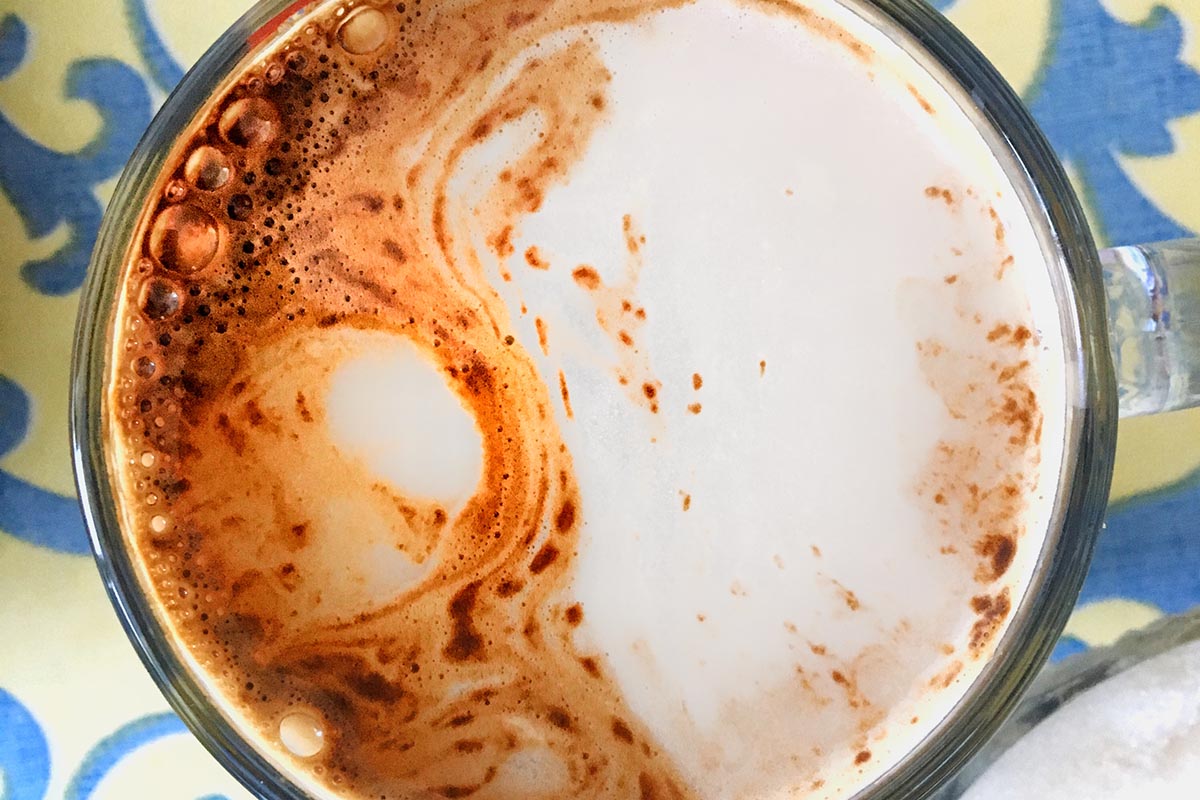 I pass by this coffee house often. It is cute, quaint and carries a local brand of coffee that is perfectly roasted every time.

I love to write there when I feel like being in the buzz of a friendly frenetic space.

It’s distressed barnwood interior walls are decorated with the kinds of casual knickknacks you’d find in those cool shops that make old, used household items seem chic and artsy. With an easy energy that subtly defines midcentury modern farmhouse styling, walking in is like entering the house of the kindly wise grandmother that on old movie would conjure up, sprinkled with an upbeat trendy vibe.

The exterior has tables and chairs meant for comfortable use. A perfect courtyard with wide overhanging swaths of vibrant colored material that create beautiful awnings add an upbeat feel to an oft-used patio space. It’s one of those spots you enjoy so much you think it would be cool to do something just like that in your own yard because every time you’re there it feels like you’re on a mini-vacation. (I smile just thinking about it!)

Then came the rain……

It was one of those storms that rolls in so quickly and seemingly without warning, that it’s as if it sneaks in right under the nose of your weather app.

Then came the hail….

The coup from rain to hail was as sudden as if someone shifted the scenery before our eyes.

The sound was deafening.

There was not a safe space to stand outside.

Everyone rushed to find a place to hover, hide or hole up.

You wanted to get out of the way, to just get under something.

Put the only way to truly protect yourself was to get inside, quickly.

The hail was falling so rapidly it looked almost as if a giant above was shaking out a massive bag of white marbles showering the landscape for as far as could be seen.

And then, almost as abruptly as the storm began, the hail stopped. The silence left a gaping stillness hanging in the air.

Everywhere you looked there were thousands of hailstones. Half dollar, quarter, dime and nickel sized hail standing, rolling, huddled together offering testament to an event that was as mesmerizing in its drama as it was stunning in its aftermath.

Contents hide
1 Cleaning up from shock and awe
2 Daily Reminders of the Chaos
3 Understanding Both Perspectives
4 Brokering a Proactive Solution
5 A Complaint is an Opportunity
6 Penny Wise and Pound Foolish: Echoes of an Empty Building

Cleaning up from shock and awe

The following day I went by the coffeehouse for a cup o’ joe and a pause in my active morning.

They were still cleaning up from the day before. Windows had been hit, two of the six big plate glass windows had impressively eyebrow-raising web-like shatter-strikes. But to me, what really spoke to the power of the storm and the damage it left in its wake was when you looked up. Each long stretch of canvas, creating the puzzle patchwork of the awnings, was riddled with large gaping holes of torn and shredded fabric. It looked like a flag to be retired after having flown throughout a long and arduous firefight.

Co-owners of the coffeehouse and husband and wife, Susan and Steve, explained to me they have been at that location for almost two decades.  Never had they experienced an event like that. You could obviously see that everyone who had been there when it occurred was still in a bit of shock when recounting the severity of the pounding.

Daily Reminders of the Chaos

Days and weeks went by.

The hail was swept away, eventually it melted.

The windows were repaired.

But, I kept finding myself reminded of the event because the awnings weren’t being replaced.

Every time I’d arrive I realized I was being captured by the image of those tattered awnings. While they still covered the patio, offering much needed shade from the day’s warmth and the sun’s gaze, the shade was almost violently interrupted by the bright glaring reminders of that intense and unexpected event.

I finally chatted with the owner of the coffeehouse, Susan, about when she and Steve thought they’d be replacing them. Susan explained to me that they did not actually own the property, they were just extremely long-term tenants. It was owned by a real estate investor outside the local area, in another state.

Apparently, that owner had paid for the windows to be replaced, but he was unwilling to replace the awnings. He had told Susan and her husband Steve, that if they wanted the patio’s protective covering to be replaced they’d have to pay for it themselves or else just take them down. The property owner felt he had already exceeded the amount of cash outlay he wanted to expend on the property following the storm.

Clearly this owner had not considered the impact of shifting climate patterns in his financial management and budgeting for this property in this region. The event itself, rain followed by hail, is not at all unusual for that area. But what was unusual was the ferocity of the event which according to meteorologists was intensified by the changes the climate is undergoing.

Susan and Steve were in a real quandary. They felt the awnings added so much to the ambiance and usability of the outdoor patio, and as a customer I absolutely agreed. But they were small business owners and the almost $10,000 it would cost to replace the awnings was a huge expenditure for them.

They did not want to contact an attorney, because that would also be a huge expense. They felt stuck and unhappy. They had been in that location for a long time. The building had been bought and resold twice during their tenure there. But this event had placed a heaviness and a sadness on their desire to continue at that location.

As a real estate investor, I absolutely understand the property owner’s perspective. But I also have always recognized the importance of keeping in mind that real estate is a customer service industry. If your customer, as in all businesses, becomes unhappy and you do not address and attempt to mitigate or correct their unhappiness, than said customer will find someone else to bring their business to.

I encouraged Susan and Steve to write a kind, straightforward and detailed letter or email to the property owner clearly explaining how they had observed their business and the property itself were being negatively impacted by the severe damage to the awnings. (Sometimes if people can sit and have time to review something, like a letter, in private without the need for an immediate response, as in a phone call, they have the time to think through the logic of a situation.)

I also suggested that in addition to resending to the investor the pictures they had originally sent following the event, that it might be a positive opportunity to also request the owner visit the property noting that he might find value in coming and doing an in-person review of the damage.

I discussed with them that if I were to receive such a conscientious letter from a tenant it would move me to positive engagement…. but that’s me.

A Complaint is an Opportunity

Susan and Steve did as I suggested.

They requested I read their letter before they send it. They wanted to be sure the tone and tenor of the letter was proactive and collaborative.

Sadly, this property owner was not in a customer service mood. And the realities and implications of weather events enhanced by climate change had not caused him to rethink his maintenance and repair strategies.

A tenant is a customer. They are valuable. Their attempt to bring an issue of legitimate concern to your attention is an opportunity.

My advice is to heed it, but whatever you do, do not squander it.

Tenants are expensive to replace. And, I don’t need to tell you, an empty property is an EXPENSIVE property, both because of the money you don’t receive because of lost rents, and because maintenance costs, utility expenses, tax payments, etc., don’t disappear with your lost tenant. You still must pay out lots of money on an empty building.

Penny Wise and Pound Foolish: Echoes of an Empty Building

They are longstanding, much valued members of the community.

Their customer base is exceedingly loyal.

Their coffeehouse has fantastic online reviews.

Many of their customers asked them about the awnings.

It so happened one of those customers owned a building across the street, just a half a block down. That real estate owner’s building offered a greater amount of available parking, easier access, a larger kitchen, larger frontage area on the street, a more substantial patio area. Additionally, since that competitor had always valued and enjoyed sitting on the patio and recognized the importance of that aspect of the business he specifically covered in the build out section of the lease that the purchase, upkeep and replacement of the awnings were his responsibility.

And he did it while also offering them a price break on the new lease so that Susan and Steve could make some exciting new changes to expand the business.

The owner of the new location recognized and was familiar with the changes that climate change was bringing to his investment locale. With that awareness was he making conscious decisions about how to bring benefit and value to his customers/tenants, in ways that were cost-effective and enhanced curb appeal.

If you use your wisdom and creativity you can offer your tenants what your competitor, who is not paying attention, will not. They will look past the needs that climate change creates, the consideration that must be responded to.

So, keep ever present in your mind that if you pay attention and find creative ways to improve the experience for your tenants, climate change can be an enhancement to your real estate business.